History of Rock Church
The Rock of Our Salvation Evangelical Free Church of Chicago (Rock Church) is located at 5618 W. Washington Blvd. on the West Side of Chicago, Illinois. It is a member in good standing with the Evangelical Free Church of America (EFCA). The EFCA is an association of some 1500 autonomous churches in over 75 countries worldwide united by a mutual commitment to serve the Lord Jesus Christ with the guidance of the Holy Spirit and obedience to the Word of God.

Rock Church’s story is about ordinary people committed to a vision and mission of community outreach, racial reconciliation, missions, discipleship, and partnering with like-minded organizations. Its community focus is the Austin neighborhood on Chicago’s West Side. In 1983, when Pastor Raleigh Washington founded Rock Church, Austin had already morphed from a predominantly White neighborhood to one whose primary residents were Black. The social, educational, and economic pillars had declined. Most of the doctors, lawyers, businesses, and churches had moved to the suburbs. Few institutions remained to provide a social structure within the community; unemployment rose to 40 percent and the high school dropout rate increased to 70 percent.

After completing seminary, Pastor Raleigh was introduced to Glen Kehrein, founding executive director of Circle Urban Ministries (CUM), a Christian community development agency serving Austin residents since 1974. Glen encouraged Pastor Raleigh to partner with Circle in developing a church home for families in the neighborhood who were receiving medical, legal, counseling, and youth services through Circle Urban. Both men recognized the need for an integrated faith-and-works ministry in order to play a role in revitalizing this now very challenging urban community. So, with less than 10 fellow seminarians from Trinity Evangelical Divinity School, Pastor Raleigh began worship services in Circle’s Law Library on the corner of Mayfield and Lake Streets. 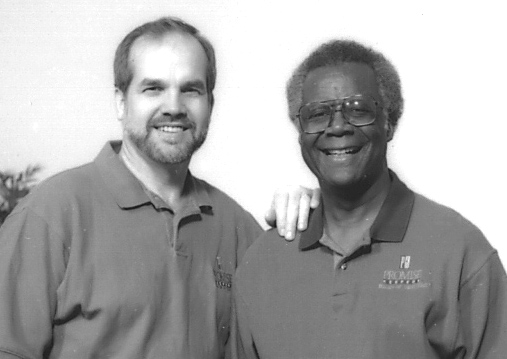 During that growth period, CUM acquired a complex of three buildings previously occupied by Sienna Girl’s High School and later a branch facility for the overcrowded Austin High School. Abandoned and stripped, the buildings had seriously deteriorated and were becoming a detriment in the community. Pastor Raleigh (Rock Church), Glen Kehrein (CUM), and individual donors partnered to get the buildings renovated enough to occupy. As a result, Rock Church moved its worship services, offices, and weekday activities to this new location on the corner of Central and Washington. The fledgling church grew to include a dynamic choir and traveling ensembles, Christian education for children and youth, and mission outreach. Most of all, Rock Church emphasized community outreach and racial reconciliation. In 1985 the church held its first annual “Harvest” featuring several days of community luncheons for hundreds, children’s day camp activities, and a free Carnival and Bar-B-Que on the last day. “Harvest” has continued each June for the past twenty-five years. Both Pastor Raleigh and Glen had enough life experiences to recognized that for a truly multi-ethnic church to succeed there must be intentional dimensions in place. The church must be purposeful about being a welcoming home for people of all cultures as well as working diligently to contextualize its entire ministry and administrative structures to adequately represent and involve each culture in the very structure of the church. This led to “Fudge Ripple” Sundays, a regularly scheduled church forum for frank communication about racial differences. In 1993, Pastor Raleigh and Glen co-authored Breaking Down Walls – A Model for Reconciliation in an Age of Racial Strife. This book outlines eight Biblical principles to be used to work toward racial reconciliation. These principles were gleaned from their years of working together and are still at work in Rock Church today.

The relative success of Rock Church in its impact both externally on the Austin community and internally with racial reconciliation focus vaulted Pastor Raleigh to a broader calling. In 1998 Pastor Raleigh joined the leadership staff of Promise Keepers, a national men’s movement. A.L. Washington, who in 1991 had become Chaplain at Circle Urban Ministries, replaced him. Following his passion for disciplining men in recovery from addiction, A.L. Washington founded and pastored Transformation Crusade Ministries, a residential recovery home and church which merged with Rock Church when he was installed as Pastor.

Under the leadership of A.L. Washington (Pastor Lincoln), the focus of Rock Church remained on community outreach, racial reconciliation, missions, discipleship, and partnerships. Harvest grew to a weeklong event and outreach directly on the streets of Austin increased. To address the growing need for youth leadership development and quality education in the community, CUM and Rock Church had previously opened Circle-Rock Preparatory School, a private tuition-based school. Observing the growth of partnering with Rock Church, Circle Urban’s Board of Directors deeded one of the original buildings in the complex over to Rock Church for the development of the auditorium and classrooms into dedicated church space. In 2008 Circle Urban and Rock Church invited Catalyst Schools to transition Circle Rock Prep School into a charter school. Rock Church secured a loan of $4M to renovated the building at 5618 W Washington to support the needs of the community through Catalyst School. Now the three institutions intertwine resources to support the educational, social, and spiritual lives of not only the students and parents of over 500 students but also the residents of the surrounding Austin community.

For thirteen years, Pastor Lincoln led the Rock Church congregation boldly in the midst of this challenging community. Rock Church continued in partnership with Circle Urban Ministries to make significant inroads in rebuilding Austin. This multi-ethnic congregation exemplifies the Biblical meaning of faith and works together–Rock Church being the ‘faith’ aspect and Circle Urban offering the ‘works/outreach’ aspect.

2011 was a transition year for both Rock Church and CUM. Pastor Lincoln resigned from pastoring the church and Glen Kehrein passed away after a yearlong battle with colon cancer. Pastor Robert L. Stevenson (Pastor Rob), who had served as youth director both at Circle Urban and Rock Church, now serves as the Pastor of Rock Church and is on Circle’s Board of Directors. Pastor Rob has been instrumental in stabilizing the church in the wake of the departure of Pastor Lincoln and Glen, both of whom were long-term innovative leaders. As a result of Pastor Rob’s knowledgeable shepherding, Rock Church stands strong and solidly committed as always to the Austin community. The heart of the congregation is set on participating in “Thy Kingdom come…on earth as it is in Heaven.” Rock Church still ministers to the whole person through a network of interdependent programs. Together we are salt and light in the Austin Community.

Today (2013), Austin is a community in recovery. Partial credit for this recovery is due to a unique partnership between a church, a Christian community development agency, and an on-campus elementary school that has worked together for nearly three decades. Our future is bright. We especially look forward to completing the facility that will be the church’s permanent home in the coming days.