This building housed Circle Community Center, located in the Austin Neighborhood of Chicago from 1975 until 1985.

BEGINNINGS
In the early 1970’s the Austin community on Chicago’s far west side was in the midst of major transition. The neighborhood’s white residents were fleeing the area as African-Americans moved further west into Austin. Real estate values were plummeting, community services were disappearing, drugs and prostitution were becoming commonplace.

At the same time a group of twenty-something’s from Circle Evangelical Free Church (Pastor David Mains) were hearing the Lord call them to live out their faith in a new way. They formed an intentional Christian community called the Austin Community Fellowship. They shared resources, including housing, and shared a vision of impacting a declining community with God’s love.

Glen Kehrein was hired by Circle Church to head up the operations at the Circle Community Center which was born after about a year after their arrival in the Austin neighborhood. They began in 1974 in a storefront with a drop-in youth center. Circle Church purchased the former Catholic rectory for St Lucy parish in 1975 for CCC since they had outgrown their storefront.

FOUNDERS
Soon joining Glen were professionals from Austin Community Fellowship who started other arms of ministry. Here is a 1975 photo showing a number of the founders:

PROGRAMS
Here is the sign that hung on the building for many years which enumerated the entities that occupied the building: 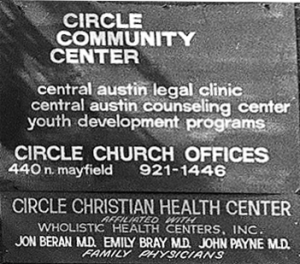 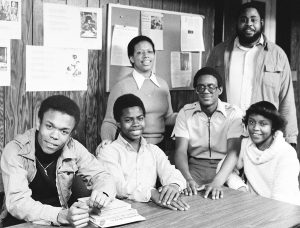 ROCK CHURCH
In 1983 Raleigh Washington, was commissioned to plant a church in the Austin Neighborhood of Chicago. He was introduced to Glen Kehrein who said the new church, Rock of Our Salvation Evangelical Free Church, could meet in the conference room at CCC since Raleigh didn’t want to be a store-front church.

CIRCLE URBAN MINISTRIES
On the hottest day of 1985, Circle Community Center and Rock church moved to their new location on the corner of Central and Washington. The name (Circle Community Center) didn’t seem to fit the organization and the many possibilities that were opening up, so it became Circle Urban Ministries.

CCC was a nice place to visit, although a little tight on space–even the hallways held a few chairs that served as little waiting rooms. The reception booth was straight ahead when you walked in–it held the building receptionist and the medical office staff. The ‘large’ waiting area that was on the left as you came in the front door was shared by all the ministries and was usually crowded. The stairs to the second and third floors were narrow and carried a lot of traffic. The medical care was on the west side of the first floor. The attorneys were at the west side of the second floor with the Law Library (aka conference room) on the east side. The youth program was in the basement. The counselors hung out on the third floor, as did Glen.

But it never felt the same.